After the collapse, paradise 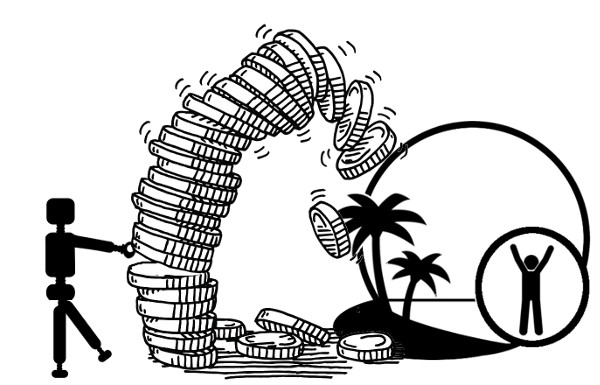 Long observed but hitherto progressive, the decline of our politico-socio-economic systems has dramatically accelerated following the consequences of a small virus and will lead to their total collapse.

Much more than our monetary system which created our extensive over-indebtedness and was at the source of all our economic and financial instabilities, it is now the very foundations of liberalism, namely democracy and the free market which have become defective and which will need to be reconsidered.

It is in anticipation of this collapse and to avoid the extinction of humanity which could ensue, that the Elohim (Hebrew plural word translated by God in the Bible and which are the extraterrestrial scientific creators of all life on the earth including men whom they created in their image) dictated to RAEL during 2 successive meetings in 1973 and 1975 a message for humanity which contains their recommendations to transition and establish a new planetary civilisation which will have all aspects of a paradise.

In these messages, the Elohim describe 2 economic systems that we should adopt if we want to avoid more suffering and extinction.

An economic system of destination, Paradism.
Paradism is the system of society of a paradise, a society without work or money where people do only what they enjoy doing. No one needs to work for a living because everything that is necessary for our survival and our blossoming could be taken care of by an artificial intelligence and robots. It is the ideal society that optimizes the freedom, the well-being, and the happiness of all individuals.

An economic system of transition, Humanitarianism.
While advocating the creation of a single currency, a world government, and a world language, humanitarianism places the well-being of all human beings at the centre of concerns.
A single currency, which is not controlled by private interests as it is today but by the government of a world federation of autonomous regions, is the key to ending economic crises and ensuring peace and prosperity.
To put an end to the excess of wealth inequalities, to the impoverishment of the population due to the gradual disappearance of jobs, and to ensure that the owners of the means of production are not the only beneficiaries of the robotization of work, ownership of the means of production is replaced by a fixed-term rental system.

This system allows for personal enrichment and free enterprise, which are important factors of progress, while providing the community with sufficient rents to enable it to provide all the services necessary for the well-being of its members.

To arrive at the state of abundance, the world government will have to resolve as a priority the plagues (much more dangerous than viruses) which are overpopulation, militarization, and pollution, which can only be solved globally, and do its utmost to create the robots that will free humans from forced labor.

To choose its leaders, humanity would be better off abandoning direct democracy which has demonstrated its limits, its imperfections, and its dangers for a selective democracy by applying the scientific method to the selection of candidates and voters. Only those who are pre-selected by objective scientific tests can be candidates. And to a lesser extent, the same is true of voters. This is how humanity will be able to choose the best among the most intelligent, the most capable, and the wisest, in a single word the geniuses. This selective democracy is called geniocracy.

The geniocracy and the two economic systems mentioned are the recommendations of a very advanced civilization that has gone through the same stages of development. Because to each stage of development of a society corresponds an optimum political-economic system.

If the collapse which has just started will generate great suffering, it is nonetheless inevitable and will allow the greatest liberation in the history of mankind.

It is to make these recommendations known and to bring a fantastic hope and a direction to a lost humanity that the Paradist Movements around the world organize each year the International Day of Paradism on May 1st.

We have the technology to free ourselves from forced labor, hunger, and misery. We just lack a little more love between us to want to share. This is the condition for establishing Paradism and making this earth a paradise.

For those who wish to better understand the collapse and the disappearance of the free market which will result from it, and to appreciate the appropriateness of the economic systems which have been proposed to us, watch the following video entitled "From collapse to paradise":