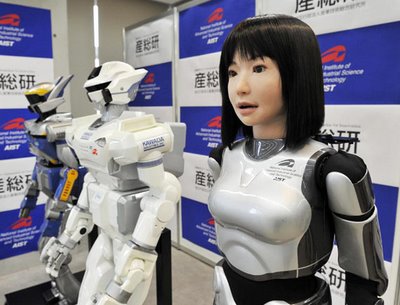 Article: Que ferons-nous des humains quand les robots feront le travail ?
(What will we do with humans when the robots will do the work?)


This article is interesting because it makes us realize that the robotization is taking place at an accelerated pace and is making us unemployed. It even announces the return to a "paradise" where man no longer needs to work.
But this article is also disappointing by the fear it inspires of this future society without work. "What will we do with humans when the robots will do the work?"
This fear is spread by standardized media controlled by powers who see clearly that their interests and power are directly threatened by the arrival of this new society.

This article, like many others does not address to solve the problem of unemployment.
It avoids the real issue of how to distribute a production that is increasingly automated.
We are being scared with rising unemployment while being careful not to expose the injustice in the distribution of production. Increasing numbers of unemployed are excluded from the consumption of a production increasingly productive.
We must be able to redistribute to the population the production by robots. That's the real issue today. And that's why millions of people around the world take to the streets. But it is never presented that way. Our attention is diverted by telling us that this is due to the increase of a bus fare.

If the media do not mention it, it is because talking about it necessarily means questioning the system that gives all the powers to those who have the capital and the means of production.
Therefore it is up to us to talk about it. Let's open the debate in our communities on the real issue of the redistribution of production and let's make people around us understand that the "communitisation" of the means of production is not only desirable but also inevitable.

This news item is from Paradism
( http://www.paradism.org/news.php?extend.34 )